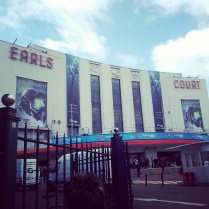 Eurogamer Expo 2012 was amazing. It was just as amazing as GAMEfest and the previous two Eurogamer expos I attended. Did anyone really think any different? Don’t be silly. I travelled to London the day before to attend the Women in Games Conference with a friend from work and stayed an extra day for the expo. It’s the first time I was let loose by myself to wander around (I admit it, I got so distracted by all the shiny games I forgot to meet up with my friend), which was an interesting experience. I’m normally a pretty shy person, so I would normally let other people do the talking or just sit and wait my turn. But I actually found being a lone girl wandering around that the people running the booths would come over and talk to me more whilst I waited and occasionally snuck me into queues (ZombiU WOO!!). I didn’t play everything because some of the queues were INSANE. I don’t even want to know how long the queue was for Black Ops 2, but let’s face it.. there was no point queuing for that when we all know it’s going to be pretty similar to the CoD before that.. and the CoD before that.. oh, and the CoD before that. But I played everything I wanted to. Here’s a run down of my top five games I played..

END_OF_DOCUMENT_TOKEN_TO_BE_REPLACED

I wrote a guest post for Adam’s blog about the first part of the “The Walking Dead” episodic game. Check it out here!

I’ve never really been a big fan of Transformers. I can’t actually tell the difference between Starscream and Jetfire. So I was abit apprehensive picking up this game. However, I needn’t have worried.. This game delivered.
It’s a short game, so unless you’re a hardcore Transformers fan who won’t mind slaving away in multiplayer mode, pick it up as a rental for the single-player. It’s true what they say, it feels like a Gears of War game. It has epic set pieces, good combat, and the characters mesh well. But because it involves alien robots, it shakes things up abit!
END_OF_DOCUMENT_TOKEN_TO_BE_REPLACED
September 24, 2009

Well as it happens, I seem to be getting a lot of hits with people trying to research Left 4 Dead: Crash Course. So I thought I’d try and answer some of the questions. My source of intel are various bits and pieces I’ve read all over the internet and heard through the distant chatter of Xbox Live.

1) Initially I was told Crash Course was coming out the beginning of September by the Valve twitter. No such luck. According to multiple sources AND Valve twitter.. it’s the 29th September. Fingers crossed it doesn’t fall through! I don’t know if it’s official.. but word must have come from somewhere!

2) Yes. I do believe there will be achievements coming with it as well. Unfortunately I only know what one of them (possibly) is; attain a gold medal on survival mode. That means last 10 minutes against waves and waves of zombies. Yes.. I’ve had to tackle two Tanks, Hunters, Smokers and millions of common infected all at once in survival mode. I screamed and was thrown into a wall. Bad times. It’s not easy. I don’t think I’ve even made it to silver before. That beast better be worth some hardcore G.

3) And in other zombie-related news.. come October 27th Valve are releasing a Left 4 Dead 2 demo!! I’m really excited about this as it’s going to be demonstrating the new melee system! I may have squealed when I heard about it!!

And there we go. Three small bits of information I hope keep you going for the next week. Mmm.. zombie killing.